Home Student Dies by Suicide After Believing He Lost $730,000 on Robinhood

A terrible tragedy struck the Kearns’s family in Naperville, Illinois when their 20-year-old son Alexander, a student at the University of Nebraska, took his own life on June 12. Alexander left behind a note to his family on his computer, explaining that he incurred losses trading options on Robinhood.

“How was a 20 year old with no income able to get assigned almost a million dollars worth of leverage?” Kearns asked in his final note, adding he had “no clue” what he was doing on Robinhood. Kearns insisted that he never authorized margin trading and was shocked to find that his small account could end up with such huge losses. 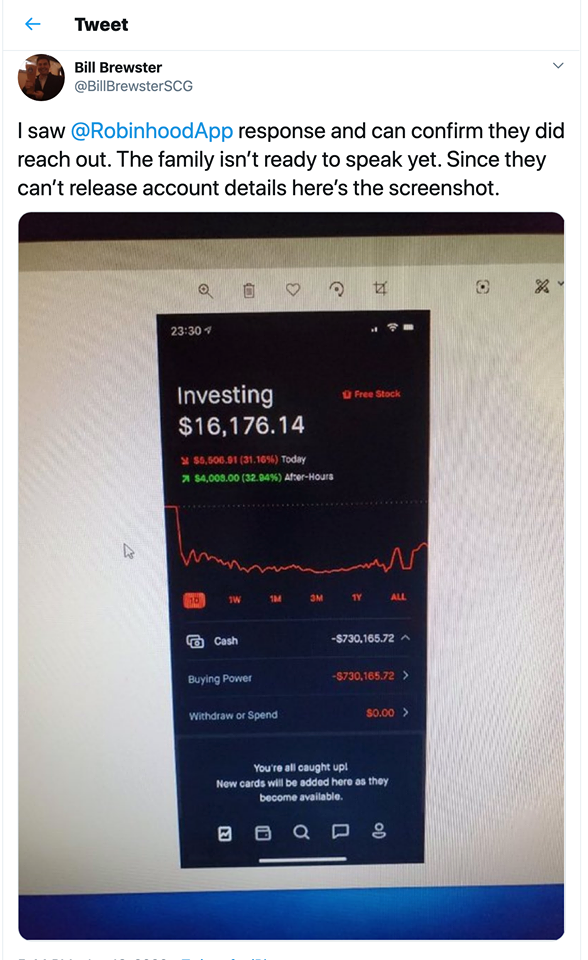 “When he saw that $730,000 number as a negative, he thought that he had blown up his entire future,” said Bill Brewster, Alexander‘s cousin-in-law, in his interview with Forbes. “I mean this is a kid that when he was younger was so conscious about savings.”

“He thought he was exposed. He thought that ending his life would protect his family from the exposure,” Brewster, who is an analyst at Sullimar Capital, told CNBC in an interview.

Robinhood is a millennial-focused brokerage firm, which offers commission-free trading in an effort to attract younger customers. Many of these young customers have little understanding of the stock trade nuances.

“Tragically, I don’t even think he made that big of a mistake. This is an interface issue, they have slick interfaces. Confetti popping everywhere,” added Brewster referring to the shower of colorful confetti Robinhood often deploys after the app users make trades. “They try to gamify trading and couch it as investment.”

In Kearns’ note, he says that the puts he bought and sold “should have cancelled out”. The bull put spread is often employed when the options trader thinks that the price of the underlying asset will go up moderately in the near term.

The bull put spread options strategy is also called the bull put credit spread because credit is received upon entering the trade. In a nutshell, the bull put spread is selling a higher striking (in-the-money) put option and buying a lower striking (out-of-the-money) put option on the same underlying stock with the same expiration date. A put option is considered in-the-money when the strike price is above the current trading price of the underlying security (in the stock options case it is the shares of a specific company).

When you buy a put option, the strike price is the price at which you can sell the underlying asset. For example, if you buy a put option that has a strike price of $15, you have the right to sell that stock at $15. In other words, it’s the price at which the holder of the options can buy – should the call option occur – or sell the underlying security when the option is exercised.

The trade generates a net credit, which the options trader keeps if the stock price stays above the higher strike price through expiration and, as a rule of thumb, the bull put spread is largely considered a limited risk strategy. This is because the simultaneous purchase and sale of put options means the maximum loss the options trader can accrue per each share is comprised of the difference between the strike prices.

For example, an options trader is bullish (a bull is an investor who thinks the market, a specific security or an industry is poised to rise) on Microsoft over the next month. The stock is currently trading at $197 per share. The options trader decides to implement the following bull put spread:

The trader earns a net credit of:

Options are traded in units called contracts and one options contract is equal to 100 shares.

It could be the case that Alexander may not have realized that the $730,000 negative balance shown on his Robinhood app home screen was only temporary and that it would be corrected once the underlying stock was credited to his account.

“All of us at Robinhood are deeply saddened to hear this terrible news and we reached out to share our condolences with the family over the weekend,” Robinhood said in its press statement following the tragedy. “We are committed to continuously improving our platform and are reviewing our options offering to determine if any changes may be appropriate.”

Sadly, Alexander Kearns’s untimely death by suicide is a part of a large tragedy America has been experiencing for the past 70 years –  the suicide rate among young adults ages 15–24 has tripled since the 1950s. Suicide is currently the second most common cause of death among college students, according to the American College Health Association. The primary risk factors that have been identified for teen and adolescent suicide include major depression, substance abuse, impulsivity issues, poor coping skills, and emotional impact from social media, among others.

If you’re thinking about suicide, are worried about a friend or loved one, or would like emotional support, call the National Suicide Prevention Lifeline that provides 24/7, free support for people in distress: 1-800-273-8255.